Where Did Pilates Come From?

Pilates was devised by Joseph Pilates as a form of mental and physical conditioning. Joseph Pilates called his method “Contrology” and it's purpose was to help people achieve physical fitness.   At a time when he saw more and more physical and mental demands placed on people, giving no real thought to their bodies bearing the brunt of our competitive and hectic lives.  If only he could see us now!

Joseph Pilates had already written a book “Your Health” but it is his book “Return to Life Through Contrology” where he really invites us to understand his method. First printed in 1945 this book explains the methodology of his thinking and provides us with what we call “the matwork” or “classical mat” as it gives us an order of 34 exercises which anyone can do at home. It is my understanding from the various workshops I have attended that this was intended for home use and you went to the studio to use the apparatus on a program intended for you and where your matwork was checked and corrected for you to continue this practice at home.

Whenever someone reads “Return to Life..” including myself I cannot tell you how relevant they find Joseph Pilates thoughts.  It is definitely akin to mindfulness, something more and more of us need in our technologically consumed lives where everything is instant. Joseph Pilates also makes it clear “rome was not built in a day” the exercises were not intended to be easy (I cannot tell you how many times people are surprised that Pilates is hard or how much effort is actually required).  He also said “PATIENCE and PERSISTANCE are vital qualities in the ultimate successful accomplishment of any worthwhile endeavour”, Joseph Pilates accent not mine on the words patience and persistence, and what endeavour could be more important in life than finding our connection with our own bodies? 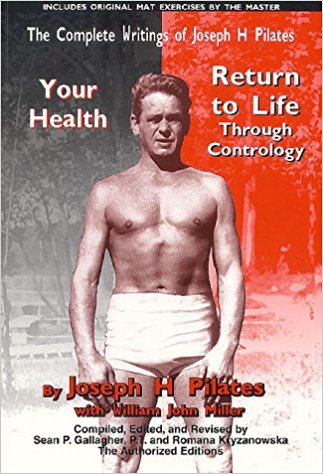 Joseph Hubertus Pilates was born on December 9, 1883 in Mönchengladbach (near Düsseldorf), Germany. Joseph Pilates developed his system on his own body, it is said that he toured as a circus perform and boxer, trained the police force at Scotland Yard and when the First World War broke out trained his fellow inmates on the Isle of Man where was he was interned to keep them mentally and physically active. It is also said that he first began creating his apparatus here on the Isle of Man as he rigged springs on beds to help train the wounded German soliders who could not get out of bed and participate.

After the war Joseph Pilates emigrated to America and opened a studio where he taught boxers and ballet dancers from the New York Ballet. I have been told that when a well-known ortheopedic surgeon did not feel surgery was appropriate for an injured dancer he would refer them to Joseph Pilates.

Pilates elders, Romana Kyrzanowska, Kathy Grant, Lolita San Miguel, Carola Trier, Jay Grimes, Ron Fletcher, Mary Bowen, are considered in the Pilates world as the torch bearers of the system and they continued to pass on their knowledge. We have Joseph Pilates books but also the apparatus he invented which has remained pretty much unchanged to this day. This apparatus includes as the most widely known, the magic circle, reformer, chair, Cadillac, ladder barrel, toe corrector, pedi pole and small barrels. I cannot tell you how the apparatus helps your understanding of the method and your matwork, as it helps you to find the opposition in the exercises with the use of feedback and resistance, which can be so elusive in the matwork sometimes. So if you have not visited a studio and tried the studio equipment I urge you to do so, you really will not regret it!